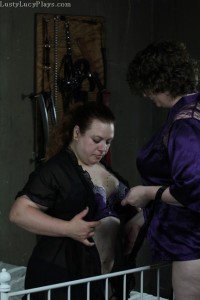 Next we moved to the medical area of the dungeon. Aubrey played doctor. She gave me a breast exam and opened my pussy wide on the gynecological table. Before the shoot, I was a bit nervous about having Aubrey’s fiancé see me naked. At that point, I wasn’t too 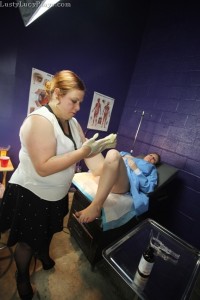 worried about the other photographer, though I didn’t know him. I have done shoots with professional photographers who are strangers a number of times and Michael has already seen me naked and had me in very vulnerable positions in the past. But I was a little nervous about Aubrey’s fiancé, as he is a friend. It was when I had my feet in the stir ups and my pussy spread wide that Aubrey’s fiancé walked in and it made me nervously and hysterically laugh for quite some time. In fact, I kept pushing out the speculum out! All my nerves went away when Aubrey climbed on the table with me and we started making out though.

The next scene was extra fun. Michael is very skilled with rope and helped Aubrey and I take turns stringing each other to a hard point so we could take turns beating each other up. He didn’t do anything as elaborate as his skill will allow (there is a great example of this in this photo set, where I include one picture of me tied in 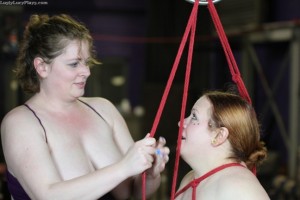 Next, Aubrey got on a spanking bench and I beat her ass crimson with my hands, a braided 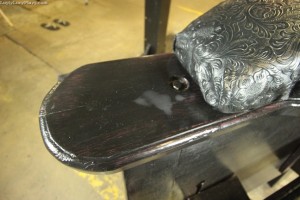 flogger and a rubber pipe-like implement, which lead to my second favorite part of the day; seeing the puddle of pussy juice Aubrey left on the bench when she got up!

We ended the day with a hot pee scene. Both Aubrey and I had been saving up our pee all day to cover each other in piss. It was so nasty and hot and the perfect way to end our day in the dungeon. We will definitely be booking the space again sometime in the future.

I’ll be adding the pictures and videos to our 2girlcam.com store soon for purchase!

I am sensual, sexual, creative and sweet. I have experience and genuine interest in more fetishes than most people can probably come up with. I have dabbled with nearly every common role play and get into them from all angles; creativity, acting and sexual energy.
View all posts by Lusty Lucy →
This entry was posted in jack off material and tagged hot pics, jack off material, videos. Bookmark the permalink.
Are you 21 or older? This website requires you to be 21 years of age or older. Please verify your age to view the content, or click "Exit" to leave.